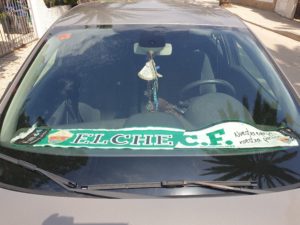 Looking for another reason to buy Spanish property in the Alicante region?

Five years is a long time in Sport or in business.

In June 2015 Elche football club, the local Alicante side, finished 13th in the top flight of Spanish football. I knew a guy, who knew a guy, who told us the finances were a mess back then. It turned out to be true and the local side was relegated due to financial irregularities and fined €180,000.

Elche were told that they must pay a debt of €7.2million or face extinction. Now, look at what happened. A 19 million euro take over, has been rewarded with a 60 million euro windfall.

Last weekend, Elche C.F. was promoted to La Liga after the most dramatic of dramatic three weeks imaginable.

Firstly, it was all over for Elche weeks ago. They had only sneaked into the play-offs places on the last day of the season, finishing sixth. But, nearest challengers Fuenlabrada still had a game in hand. Their match with already relegated, Deportivo La Coruna was called off due to players testing positive for COVID-19.

Finally, that game, a dead rubber for Depor was rescheduled over two weeks later, with Fuenlabrada needing just a point to finish sixth at Elche’s expense. They were leading at full time, meaning Elche were out.

It was not quite over. Fuenlabrada conceded a last-gasp penalty and lost 2-1. Suddenly, two weeks after the season ended, Elche had a shot at returning to the top flight.

More drama in the playoffs; Elche survived having a player sent off after just half an hour in their semi-final first leg. They drew with Real Zaragoza somehow 0-0, before reaching the final by winning the second leg away from home. The goal scorer is a fresh-faced 40-year-old striker Nino.

And more drama: Again the first leg, at home in Elche finished 0-0.

Elche was promoted last weekend, however, after beating 10-man Girona 1-0 away from home, thanks to a goal in the 96th minute of the second leg. (Pere Milla) Just visualise if you can, the wild scenes at Girona’s home ground Estadi Montilivi last week. Madness. The celebrations lasted until Monday where they had a ceremony to welcome home the victors, in the empty Elche stadium- why not?

Milla’s excellent late, late header, which came after Girona’s talismanic striker Cristhian Stuani was sent off after an hour, was the final surprise to a magical 12 months, or 60 months really.

There will be a quick turnaround for Elche though. The playoffs went on so long, they have just two weeks to prepare for the 12th of September restart. Although even the commencement date is in doubt due to a dispute between La Liga, the clubs and local authorities. My heart.

If you’re thinking of coming to Spain and wondering where you can relocate to, we think that Spanish Solutions will prove you with the legal and tax advice you need. Elche football club will provide the drama.