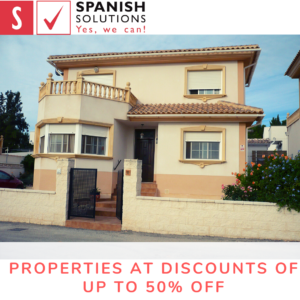 Spain hasbeen for many years seen as a very solid property investment. From 1996 to 2007 the average house prices in Spain rose by 197%.

Foreigners bought here to retire, to not miss the boom, to get a piece of that rental income, and of course to get themselves on the Spanish property ladder.

What happened with Spanish house prices after the boom?

We all know what happened next: the boom hit badly in 2008. It is fairly recently that the market has recovered- prices rose by 6% p.a. consistently over the past few years.

Today, prices are in many areas still 33% below the highs of 2008, a full ⅓ below what property was trading for over a decade ago. According to Tinsa, the trusted valuation company, and the INE, (Instituto Nacional De Estadistica)

Foreigners are once again driving prices high with Britons, Scandinavians, French, Belgians, Germans and non-Europeans all dipping their toes back on the market. Foreigners are buting investment properties.

Foreclosures fell by 10% last year and the INE expects further drops as we gather the final figures of 2019. It’s a good time for the Spanish property market.

Sales could reach 650,000 units this year with increase nationally in the region of 7%. (source Tinsa). The economy in general is increasing too here.

The European commission despite the Brexit threat, see lots of reasons for optimism and growth should continue.

Are you looking for a new way to invest in property in Spain?

What is Bare Ownership in Spain?

This fully legally and ever-increasing in popularity idea involves owners of property in Spain selling their homes for large discounts in exchange for a lifetime lease.

A right to stay in the property rent-free until the end of their days. At first, it sounds morbid. Investors are buying houses from elderly people in the knowledge that they may only live there for 10 or 15 years. The age expectancy in Spain is higher than the European average at 83 or so!

We spoke to a few of our clients (property owners) about it however, and they love the idea. They trust us and know we are not going to put them in any sort of negative situation. We would not allow these clients to do anything we would not let our Granny do!

Many of these people have already helped set their kids up back in the UK or Ireland, so the kids have gotten all they are getting! The notion of getting a lump sum into their hand now really appeals. Literally we have 100 sellers waiting to speak to investors and that is without any advertising; it appears that our elderly Spanish property owners love the idea, simple as that.

They never need to leave their home, they get a tax efficient lump sum to spend on a cruise around the world or a new car, and they can do it all without their neighbours ever needing to know.

Maybe this relatively new to the market idea of Bare Ownership is for you?

View all the Bare Ownership Properties

What about for the investor?

Take this real example: A client of ours has a 400,000 euro property for sale overlooking the sea in Alicante city.

He is 68, 15 years of life expectancy left, but he wants to travel the world before it’s too late, visit the Mayan ruins, that sort of thing. He’ll sell his home for 200,000 euro, with a 20 year / lifetime lease included.

If he sells the property, where will he go?

He does not want to move- he is asset rich, cash poor!

For the sake of argument, let’s say that means the investor is buying with no money down, and he is repaying 1,000 / month over 20 years. It is never quite this easy, but the figures work for this example.

He has no income tax to pay on the rental income as there is none and as George, the owner, has minded the apartment so well for the past ten years we know he’ll continue to do so.

After George passes, our investor takes the keys back to his home.

There are not many investments in Spain that give that kind of return.

Terms and conditions as can expect apply, but maybe it is worth speaking to Spanish Solutions about how it can work for you.