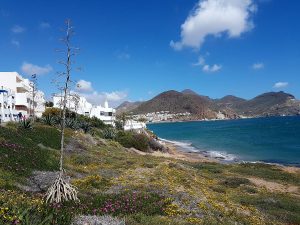 Just two hours of easy driving South from La Zenia on the AP7 motorway towards Almeria is another world, a hidden gem of Spain called the Cabo De Gata National Park. Even on a weekend in August where the resorts of the Costa Blanca are heaving, this is an area that is still reasonably quiet.

It is a wonderful place and very different from the La Zenia area, so a real contrast.

Las Carboneras is just at the eastern tip of the National Park. Although it is home to a large cement works and a desalinization plant, it still has a convivial relaxed atmosphere. It has night-life most of the year as it is a major sea-side town. The main town has fine beaches, and just a little out of town is the popular beach of Playa de los Muertos (the Beach of the Dead). This is reported to have been voted one of Spain’s top beaches. 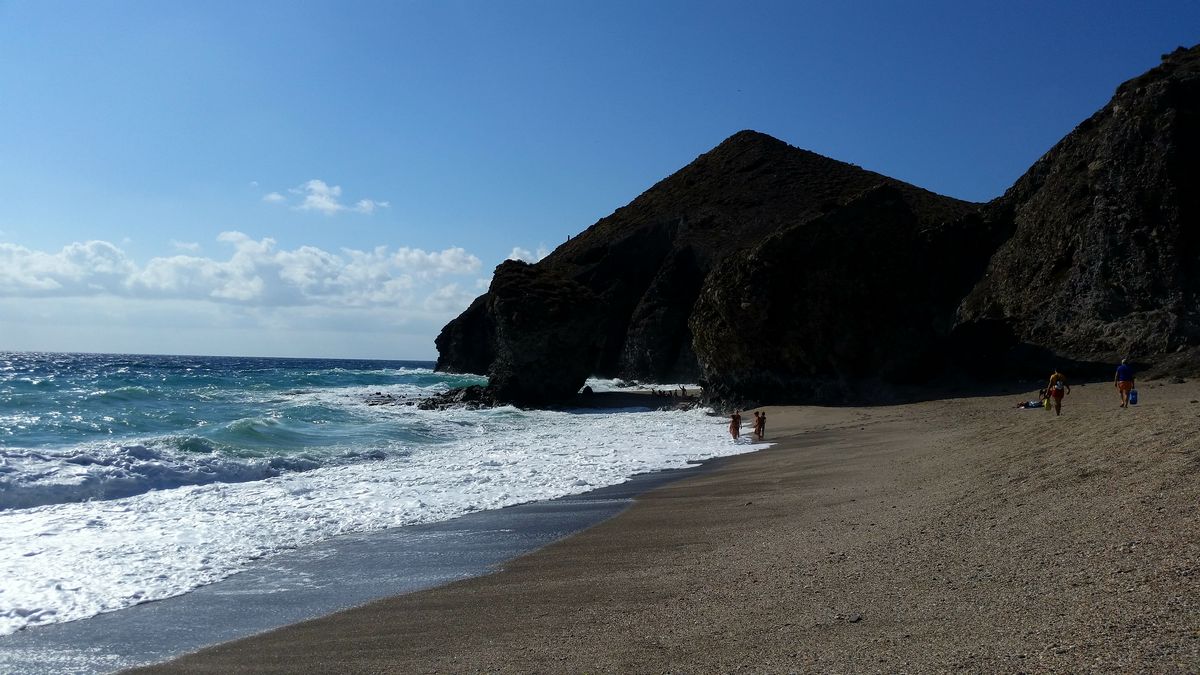 This part is relatively wild and we had a 25-minute walk downhill to the beach, which was stunning and reminiscent to me of those in South Africa or the Gower peninsula in Wales. Some have said if you are not dead by the time you get down there, you will be when you climb back up! But for those who don´t mind a beautiful walk, the beach is worth it. Usually, the water is crystal still and clear, fantastic for swimming and snorkelling. 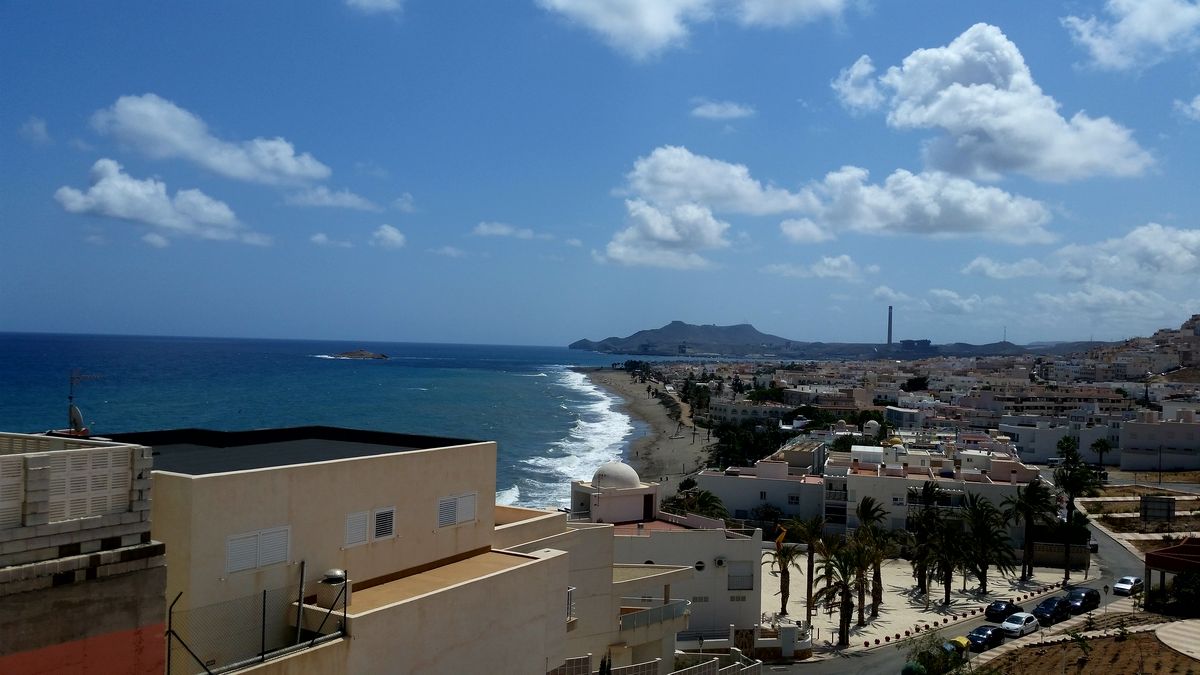 Agua Amarga is a fairly chic, trendy place, with whitewashed low houses. It has some great shops with fashion and homes accessories. The beach is easily accessible here and is stunning.

Cabo de Gata-Níjar Natural Park is characterised by volcanic rock formations and the park joined UNESCO’s Global Geoparks in 2006. Between the village of San Miguel and the Cabo de Gata point are salt flats separated from the sea by a 400 m sandbar. They have flamingos and a plethora of wildlife.  Its coasts have seagrass beds and offshore coral reefs, and thus the area is very popular for snorkelling and diving.

However, if the multitude of different beaches and snorkelling/diving is not your thing, just driving around the national park is very enjoyable. The characteristic vegetation is desert flora: the exotic tall agave plant, prickly pear, dwarf fan palms and a number of desert plants. Many films have been produced close to this area, such as Indiana Jones and the Last Crusade. Also the Good, the Bad and the Ugly and For a few Dollars More. There are some great places to eat fresh fish and seafood.

Just to mention a couple of places, Las Negras is a little different from the other villages, It is a peaceful yet lively little sea-side village towards the eastern end of the natural park and just to the west of Agua Amarga.

It has a lively night-life and some great places to eat and drink and enjoy live music. Las Negras has a lovely black stone beach on which to sit and watch the world go by.

Níjar has been described as one of the most picturesque towns in the whole of Spain. It is known for its superb handcrafts in pottery and carpets. Located inland and on the northern edge of the natural park, it comes highly recommended as a place to see. It should be on any visitor’s itinerary. 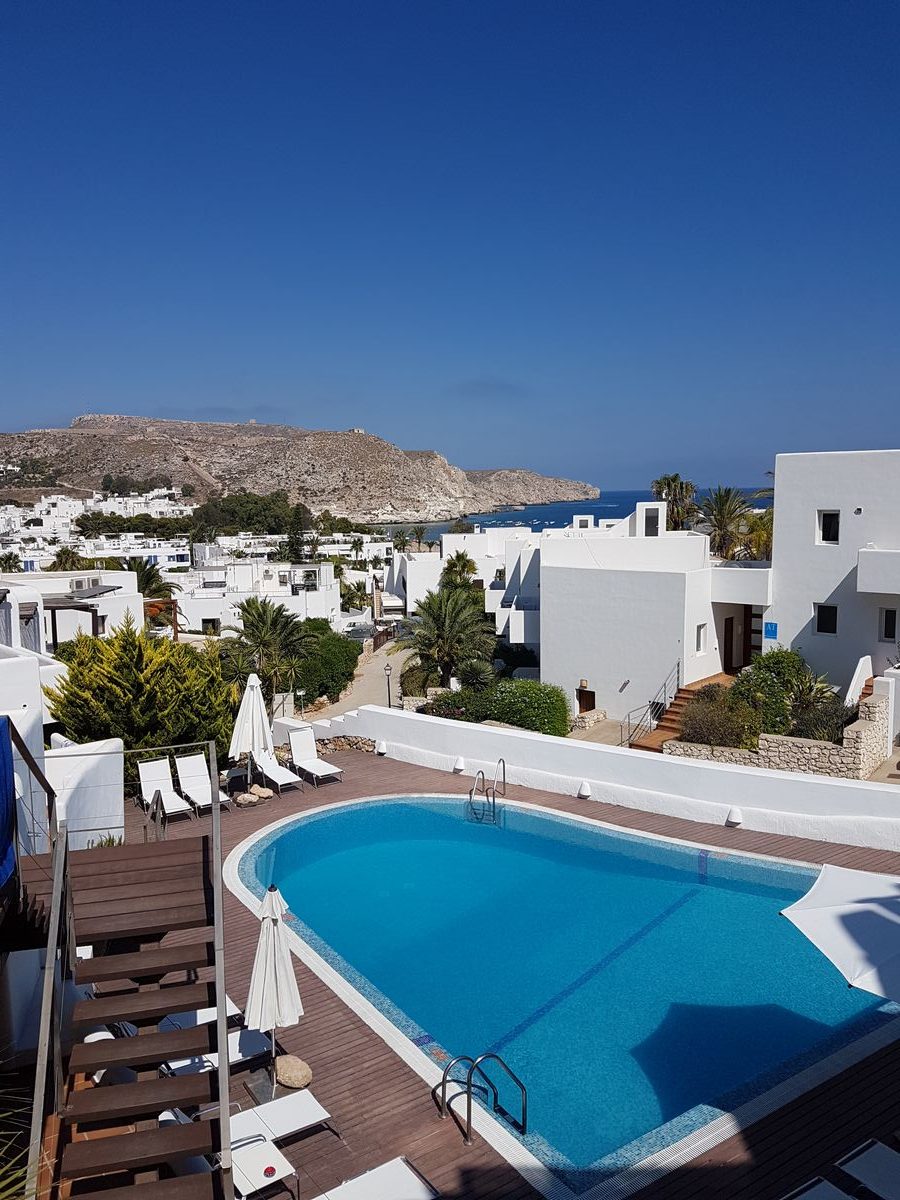 The strip of beach known as Playa de San Miguel and the adjacent road stretches from Cabo de Gata to La Fabriquilla. Then it ascends a tiny mountain pass towards the Arrecife de las Sirenas and the stunning beaches beyond. There are a number of hotels and places to eat and drink along this beach and more than enough space for any number of people.

It is an absolutely stunning long beach with wonderful walks and views.

Cabo de Gata has a tradition of fishing which continues to this day. There are a number of old fishing boats that have been left along the Playa de San Miguel as artefacts of days gone. It is a very long beach here with beautiful clear water. 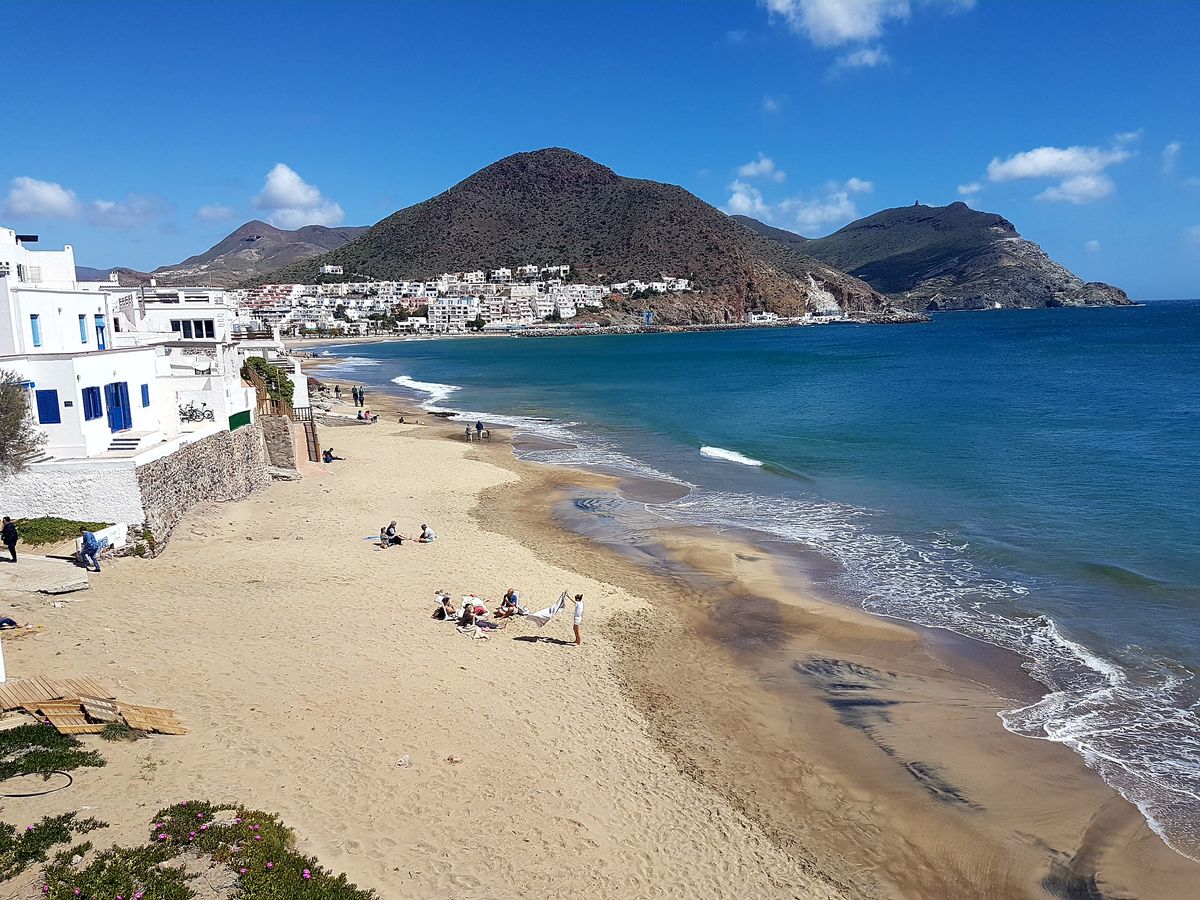 We would recommend going in the Autumn or Spring when the weather is ideal for walking, as there are so many nature trails and good information offices with maps to assist.