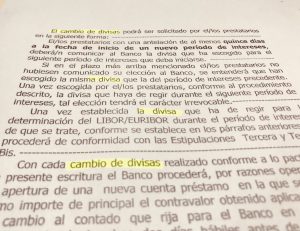 Many people are now aware that the European Court of Justice ruled on abusive clauses such as Mortgage Floor Clauses, put in a mortgage deed by some banks which basically meant that when interest rates went down the bank retained a minimum floor clause, so customers still paid a high interest.

Not so common are multi-currency mortgages in Spain, but these also have been declared illegal in Spain in some cases.  We have a client who ten years ago got a mortgage and bought a property. At the time, banks were just starting to offer the option of multi-currency mortgages, selling them as actually a better option (so the Bank said), to keep monthly repayments down, as the bank would be swapping between different currencies, in order to always have the lowest exchange rate applied to the monthly repayments, thus keeping the costs supposedly lower than for a normal euro mortgage.

Our client was persuaded to take out a mortgage in Japanese Yen, being advised that this was the best currency at the time.

Unfortunately, matters did not go as expected for our client, and the repayments did not stay low, but actually went the opposite way. From the following year after taking out the multi-currency mortgage in Japanese Yen, repayments went up and kept mounting for a few years, and despite our client visiting regularly the Bank that had offered the mortgage (and the promises), requesting them to change currencies, so that a lower exchange rate would apply, as the clients had been advised at the beginning, it never happened.

The client realised too late that it had been a very expensive decision to take out their mortgage in multi-currency, and it was affecting them greatly. After six years they felt they had no alternative but to place the property on the market for sale, and they got back just about enough to pay off the mortgage.

Then, after all this time, a few months ago they heard in the news that multi-currency mortgages in Spain were also declared abusive and they contacted our solicitor at Spanish Solutions to explain their case, providing him with copies of the deeds. He confirmed that they had a case and that they could proceed with a legal claim against the Bank, advising that a litigation power of attorney would be required for him to deal with it.

Only a few months after the claim started, our solicitor was able to confirm that after some negotiations, the bank was offering an amount to settle the claim, rather than being taken to Court. The client could not believe how quickly it had been resolved and they received back a substantial amount.