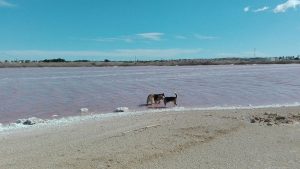 As many of you know, Torrevieja is surrounded by two large and beautiful natural salt water lakes which form the “Salinas de Torrevieja” and are an official Spanish nature reserve. The la Mata salt lake was declared an important area for birdlife in 1989 and the whole area was declared a Natural Park in 1996. The history of the salt lakes goes back many years to the 13th Century and they are the oldest and biggest salt lakes in Europe.

The Torrevieja lake is still in production today but there is no longer salt produced at La Mata. There is very little vegetation in the salt lakes due to high level of salinity, although there are some rush beds mainly in the La Mata lake which are home to rush bed loving bird species. The lakes are an important area for birdlife and there are over 200 species that visit the area including flamingoes, avocets, zapullines, plovers, stilts and grebe.

Torrevieja itself now has a Salt Museum located across the road from the old RENFE Station and Natural History Museum. The centre offers an overview of Torrevieja’s salt industry and its history. In the centre you can see for yourself what industrial salt looks and feels like, images of the salt lake, an overview of the extraction process and topics such the formation of the salt harvesting, mining, and technology.

Last Winter´s harsh weather and abundance of snow in Northern Europe and even around Spain, has led to a change in fortunes for Torrevieja’s most valuable natural, commercial resource, Salt. While the majority of the city’s income is due to the influx of tourists who enjoy the clean air, sun, sea and sand, the major manufacturing in the city remains as it was in Roman times. Salt then was actually a currency.
Salt production this year has apparently increased by 15%, up from 600,000 tons in 2010, to 700,000 tons this year.

The salt process begins with the entry of the sea water into the lagoon of La Mata, where because of the evaporation caused by the sun and wind, it becomes heated and concentrated. From this lagoon it is transferred to the Torrevieja lagoon, where it is mixed with the brine which has come from the underground salt deposit in Pinoso, that consists of five wells into which high pressure water is injected which then results in the salt dissolving. The resulting brine is carried by a 50 kilometre long pipeline to the Torrevieja lagoon where it mixes with the brine already there, which has come from the La Mata lagoon.

What most can see from afar are the process of when the salt is piled up in large heaps of about 20 metres in height, called ‘garberas’ or Salt hills. This is then perfectly suitable for any use for which it is required: de-icing roads, decalcifying water, chemical industry, food industry etc. and can be used no matter how old it may be.
It is well worth a visit to the museum and to the lake of La Mata, where you are sure to get some beautiful photographs.