Overtaking in Spain and Other Driving Issues 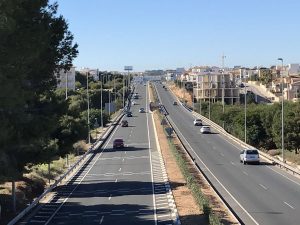 This morning on a back road near Las Colinas Golf Course, I saw a car nearly cause two accidents by some terrible overtaking. He or she nearly caused two serious problems within the space of a few minutes. Whatever their excuse, late for work, a meeting, whatever, there is no possible excuse for endangering other people´s lives in this way. How I wished that some of the Guardia Civil had seen this car, twice overtaking at speeds on blind bends into incoming traffic.

Ironically, I was reading some of the law on this topic yesterday passed on by our friends in the N332 Group. It is well worth reading their online magazine.

Firstly, please remember that when we want to overtake, for example, several vehicles over 12 metres long, it is advisable to warn them of our presence so that the drivers of these vehicles leave a greater safety distance between them that allows us to overtake safely. If they know that you are driving behind them, on one-lane roads going in each direction, the drivers of these vehicles are able to warn you by right-flashing or by waving their arm backwards and forwards. It’s courtesy, not obligatory

An obligation to warn of manoeuvres

1. Drivers are obliged to warn the rest of the users of the road about the manoeuvres that they will carry out with their vehicles.

Any change of intent, direction or lane must be indicated so that other road users know how to manoeuvre their vehicles.  The most common infractions are drivers who do not signal changing lanes when overtaking, both when starting and rejoining a lane, leaving a roundabout and when leaving a parking area, the latter two being the most common infractions. People just seem not to bother.

2. Generally, these warnings should be made using the vehicle’s indicators or, failing that, arm signals.

If due to damage to a vehicle´s lights, the driver is forced to drive with lower intensity lighting, they should reduce their speed until the vehicle can be stopped in an illuminated area.

There are drivers who drive with full beam lights when they blow a bulb. It must be taken into account that these lights produce a glare
to other drivers, so they should be turned off when there are other drivers nearby. Everyone should know this!

If the main headlight bulbs have gone, you can not continue driving because you can not drive permanently using the full beam lights.

1. The driver must signal to warn any lateral or rear manoeuvres that involve their vehicle, as well as their intention to stop or slow down its progress considerably. Such warnings should be made sufficiently in advance of the initiation of the manoeuvre, and, if possible, remain in operation until the end of the manoeuvre.

In case one of your indicators breaks, it can be replaced by arm signals, which will be valid if they are done properly and as long as they are visible to other users.

These manoeuvres are only to be carried out temporarily in the event of problems. As a general rule, you will not be able to drive the vehicle with the indicators not working, or using an arm, as it is a sanctionable offence.

2. Regarding the above, the following should also be taken into account:

a) A lateral movement (changing lanes, existing a highway) should be indicated using the indicator signal corresponding to the side that you are moving, or the arm, in horizontal position with the palm of the hand extended downwards if the movement is going to be towards the side that the hand is indicating, or bent up, also with the palm of the extended hand, if it is going to be towards the opposite.

In manoeuvres involving a turn, the warning must conclude as soon as the vehicle has adopted its new direction.

b) Reversing should be alerted using the corresponding reversing light, if available, or, if not, extending the arm horizontally with the palm of the hand backwards.

c) Intending to stop the vehicle or to slow it down considerably, even when this is imposed by traffic circumstances, should be indicated
whenever possible, by the repeated use of the braking lights or by moving the arm alternately from top to bottom with short and fast movements.

When a breakdown takes place on a motorway or highway, or in places or circumstances that significantly reduce visibility,
the presence of the vehicle must be indicated by the use of the hazard lights, if available, and, where appropriate, with the position lights.

Remember that if you break down on the highway and have to stop your vehicle on the hard shoulder, you must signal this by placing the emergency triangles. One or two according to the characteristics of the road.

If you are stopping or parking, the direction indicator light corresponding to the side to which it is to be carried out should also be used.

1. Exceptionally or when provided for by traffic legislation, horns may be used that are not strident, and their unmotivated or exaggerated use is prohibited.

2. Acoustic warnings can only be made by drivers:

a) To avoid a possible accident and, especially, on narrow roads with many curves.

On narrow roads where there are often two cars and there are bends that prevent the visibility of traffic in the opposite direction, the horn is usually used to warn of our presence to approaching traffic, with the aim of lessening the speed of the other car, making them stick to the right edge and the vehicles can pass safely. (Not like my journey this morning!)

b) Out of populated areas, to warn the driver of another vehicle the purpose of overtaking.

You can sound the horn before overtaking a vehicle to inform the driver of your intention to overtake it so that the car then stays at
the right edge of the road.

c) To warn of your presence to the other users of the road.

Many of you will not realise this but:

1. It is forbidden to keep the doors of a vehicle open (obviously on a road),  before the vehicle has been completely stopped
or open them or get out of the vehicle without having previously ascertained that this does not cause danger or a hindrance for other users, especially when it comes to bicycles!

The boot of the vehicle is considered another door, it is prohibited to drive with certain types of boot open or semi-open when transporting some type of cargo that prevents it from closing. In this case, people must place the load on the roof in a roof rack or look for another vehicle as all doors must be completely closed before starting a vehicle.

2. As a general rule, the vehicle must be entered and exited on the side closest to the edge of the road and only when it is stopped.

3. Any unauthorised person should refrain from opening the doors of vehicles intended for the collective transport of passengers (like a bus), as well as closing them at stops, hindering the entry of travellers.

1. Even if the driver does not leave their seat, they must stop the engine whenever the vehicle is stopped inside a tunnel or in a closed place and during filling up with fuel.
2. Any driver who is obliged to remain with their vehicle stopped inside a tunnel or other closed place, for a period of time exceeding two minutes must stop the engine until they can continue the journey, keeping the lights on.

Inside a tunnel or inside an underground parking lot of a shopping centre traffic jams sometimes occur, either by accident or by a massive influx of vehicles (sales or holidays). In these cases, if the traffic is not moving we must turn off the vehicle´s engine off until we see that the vehicles begin to move.

Remember that not shutting down the engine and leaving at least the lights on can be a reason for sanction. We must make the car visible to other users, and turning off the engine will prevent the accumulation of toxic gases harmful to health in closed areas.

3. In order to fill up a vehicle with fuel, the engine must be off.

The owners of garages or employees will not be able to fill up a vehicle if the engine is not stopped, the lights of the vehicles are turned off, the electric systems such as the radio and the devices emitting electromagnetic radiation such as mobile telephones are turned off.

4. In the absence of any garage workers, the driver of the vehicle or, where appropriate, the person who is putting the fuel in the vehicle must meet the same requirements established in the previous section.

If we can help you with any traffic issues such as change of ownership, change of licences or other matters please contact Gema on frontdesk@spanishsolutions.net