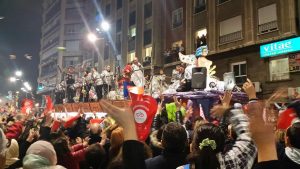 The Burial of the Sardine festival in Murcia is one of the strangest and most fun fiestas I have ever been to in Spain. If you want proof that the Spanish (sorry my beloved colleagues!) really could make a fiesta out of the opening an envelope, you almost have proof with this quirky celebration (said very tongue in cheek).

The “Entierro de la Sardina” is a fiesta which traditionally ends Carnival in many places around Spain and apparently dates back to 1850 when students in Murcia were so tired of eating sardines during Lent that they decided to have a procession and celebrate the burial of the sardine.  This fiesta has now grown exponentially and is a blaze of colour, madness, fun and craziness.

Burial of the Sardine

When you visit Murcia city for this festival, there are parades held over three different days. On Thursday there are modest parades and Friday night there is the Last Will parade of the Sardine (basically reading the last rites).  This reminds me a bit of a carnival parade with jugglers, dancers, noisy bands, colourful clothes and of course, a float with the sardine (not just a normal sized paltry little sardine, but an enormous giant sardine with pride of place. This year, this takes place on Friday 6th April 2018.

The big day, however, is on Saturday 8th April, when the main parade is held. During the day, you will find many things going on but from 9 pm there is the real fiesta as the carnival season draws to a close and the streets are filled with processions, music, dancing and street acts: general entertainment for the crowd.

There are different groups of “Sardineros” who each have their own carnival float and you will be able to spot them with their capes and colours. They will be handing out sweets, etc, as they pass. They also have a big satchel full of goodies to hand out to the crowds over the weekend. They all have names and costumes from Roman Mythology. Each float is decorated according to their theme and as usual families and whole neighbourhoods will have been preparing for this fiesta during most of the year.

The Fiesta has a Queen who presides over the proceedings “Doña Sardina”. On the Friday night, she is the one who reads out the last rites to the sardine. There is also the “Big Fish” or “Gran Pea” who is the King of the Festival.

Hachoneros – These are people wearing sort of striped pyjamas with a cone-like hat on their heads. You will find them blowing whistles all the time. They keep the crowds under control and hold torches to light up the streets, and to symbolise the fire which will later be used to burn the sardine.

Granaderos – These are soldiers in blue uniform and they carry huge cutlery to eat the sardine. They prod the crowd as they go by in the procession!

Conte´s Dragon – This is a Dragon made by González Conte, a local artist, known for papier mache and modelling. The Dragon model is the symbol of the parade. Fire is lit in the Dragon’s mouth to make it look as it breathes fire.

You will be handed a lot of advertising for businesses and the reason becomes clear towards the end of the evening when you will see everyone around you poised with big plastic sacks waiting for three to four huge floats laden with food items, small toys etc, which are then surprisingly thrown down into the eager crowd, with the result of ensuing madness and frantic scrambles by children and adults alike to grab what they can. But it is all good fun. The floats are themed and remind me very much of a Rio carnival with incredible costumes, some quite racy!

At 1 am or so the burning of the sardine takes place, just at the end of Gran Vía. Before the burning, a show is put on to entertain those present until the time arrives. Big Fish and Ms Sardina light the sardine, and it blazes brightly. The heat from the fire is immense, but they put it out soon afterwards with water. There are also some amazing fireworks to mark the end of this three-day festival. 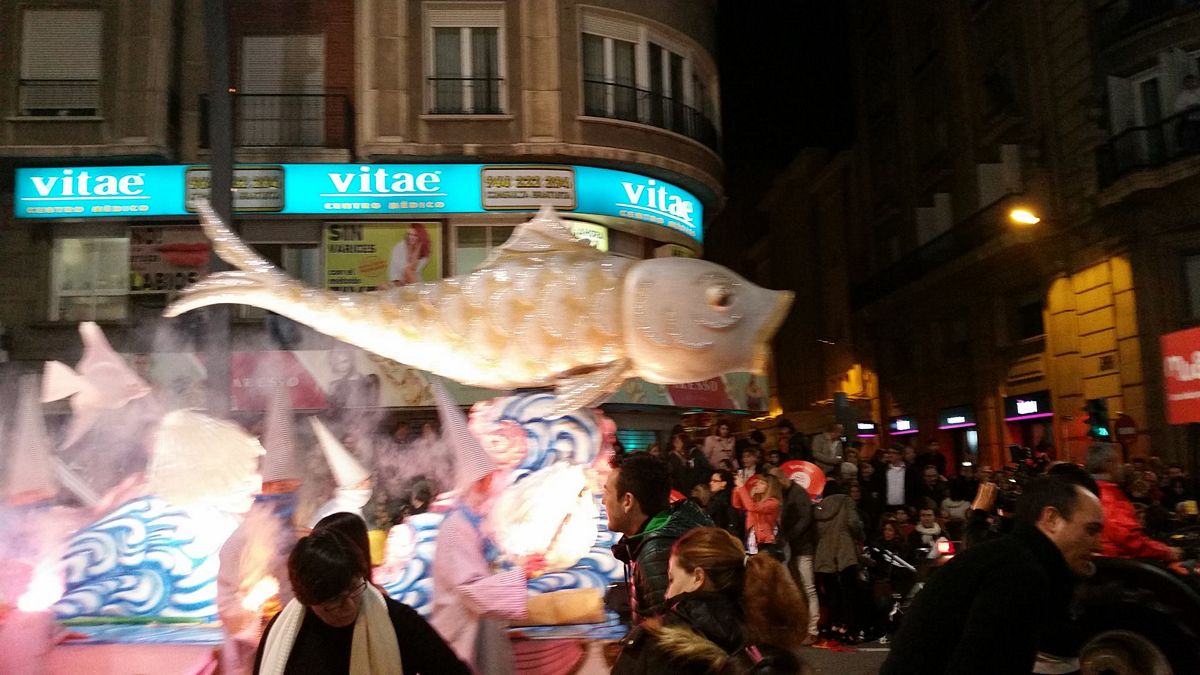 Arrival of the burial of the Sardine 2018

Procession, Will and Last Rites of the Burial of the Sardine

Grand Procession Burial of the Sardine 2018