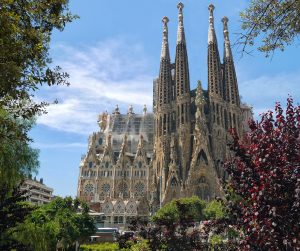 Spain’s planning laws are complicated, it is fair to say.

Spanish Solutions work with a top architect, Antonio Martínez Rosique from Pilar de La Horadada, and he knows how to get plans passed for pools, extensions, conversions of commercial properties etc.

Meanwhile in Barcelona, the famed and beautiful Sagrada Familia church has received a building permit. It only took 137 years.

Acclaimed Spanish architect Antoni Gaudí was the designer of the project, yet he didn’t have the correct Spanish planning permission in place!

Work began in the year 1882! Guadí taking over the following year. His reputation as God’s architect did not help speed up the planning process. It seems Gaudí didn’t like to draw plans for his work, he built models instead and used this as his blueprint. I cannot imagine the Orihuela Costa town hall signing off on the project either without detailed plans. Antonio is the one who draws all our plans before submission to the town hall.

Although Gaudí spent the remainder of his life on the Barcelona building project, when he passed away in 1926, only a fraction of the building was complete. Incredibly, work has continued since then.

Even in its incomplete state, Sagrada Familia church has become Spain’s most visited building and one of Barcelona’s most popular tourist attractions. An estimated 20 million people visit the church every single year. Gaudi’s work has been recognised as a UNESCO World Heritage site!

A legal dispute emerged over the past 10 years because of the issue with the lack of a construction licence from Barcelona town hall authorities. In 2018, an agreement was reached between the church’s management and the city council. The injection of 35 million euro by the Sagrada Familia authorities to improve local infrastructure and the city’s new public transport system managed to get the plans passed.

Although, the building licence has been officially approved by the Barcelona council they must wish they had done it properly 140 years ago.

We can help you with licences to open a business in Spain (The church in Barcelona is a money making machine). If you are selling your property in Spain you need an Energy certificate and a Habitation certificate. Importantly, if you intend to rent your property in Spain, we will help you get all the licences in place. The owners of the Sagrada Familia are lucky they didn’t decide to rent a few rooms in the church AirBnB style! The local governments and councils are fining landlords all across the country for doing so without permission.

We’ve written about planning permission in Spain before:
https://www.spanishsolutions.net/blog/property-in-spain/importance-of-planning-permissions/  If you are building a church, garage, pool, bar, etc you should contact Spanish Solutions first!