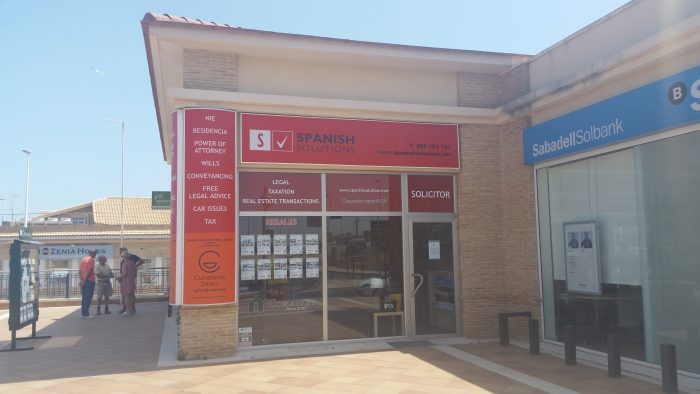 Costa Blanca legal firm Spanish Solutions is fighting a major court case on behalf of people who paid for their properties in full and never received the deeds because of an illegal mortgage taken out on the property.

The Class Action involves a number people, but the law firm believes that hundreds more are affected and are missing out on the opportunity to have the threat of repossession removed and the illegal debt paid off.

Roy Owens realised several years after he bought his Spanish home that it was not actually his….The original developer had a large mortgage on his home and unlike in the UK, this mortgage was still in place, as in Spain the buyer inherits the debt. The builder went into liquidation and disappeared, but the debt remained.

According to the bank Roy was legally responsible for the 50,000 euro debt and could not sell the property without the deeds. Without the resources or the wish to pay someone else’s debt Roy faced the threat of repossession. He had paid for the property in full but never received his deeds and it wasn’t until several years later he discovered the terrible reason why. Roy is now one of many people that are named in the Class Action to see justice done and save people’s homes.

The builder was able to take out these mortgages on the homes because all of the buyers had given power of attorney to a prominent legal firm in Torrevieja to act on their behalf. Over time it emerged that this law firm never signed for the properties at the Notary, therefore, the properties remained in the builder´s name, despite the fact that the buyers had paid in full.

The builder took out mortgages on the properties and then as the housing boom bubble burst a few years ago, went into liquidation. With the economic climate changing, the banks began pressing for repayment on the mortgages, eventually repossessing them in the hopes of either auctioning or reselling them. Amounts of up to 200,000€ were paid for properties that have never been transferred into buyers´ names.

Spanish Solutions, a legal firm on the Costa Blanca, realised that this was a case of possible misrepresentation. The lawyer who acted for these clients in the purchase of their properties had a professional duty to take care of the client and ensure that all was present and correct before the final amount was paid for the property. They also had to ensure that they got the deeds – so the barrister felt there was definitely an avenue of legal action against the Torrevieja law firm who were supposed to be representing these clients, and also the estate agent, which is well-known and still operating to encourage UK expats to buy abroad. There was a definite link between the two businesses, with the estate agent promoting the legal firm as its preferred legal partner.

Now there are Actions in the Courts against both companies in both the UK and Spain.
Some clients achieved a Court Judgement in their favour many years ago against the Builder, but the lawyer´s firm never executed it, as money needed to come from somewhere to repay the mortgage and there was nothing the law firm could do to solve this problem, as they were aware the Builder had no money. The mortgages would only be cleared if they persuaded the clients to pay off the huge mortgages, or the law firm accepted responsibility.

Roy and Margaret Bache are another couple recently in the dreadful position of being informed that the bailiffs were coming to change the locks and repossess their home. The house had been transferred at auction to the bank´s estate agent company and would be sold. The couple, who have lived in their ‘dream house’ for 13 years were devastated. However, Spanish Solutions was able to stop the repossession after its solicitor was on site to present legally valid arguments and documentation.
The Baches said: “We dread to think what would have happened without Spanish Solutions, we couldn’t fight this on our own. They are our heroes.”

Spanish Solutions is currently waiting for another Court hearing in the next few months where it will fight for the possession of the house. At the main trial, hopefully next year, the team hopes to see the mortgages cleared or large sums of money refunded to clients who have lost their properties (even if they have no connection to Spain now) and the clients put back into the same position – physically and financially – as if nothing had happened.

There is still time for people in the same position to fight and take advantage of this first Class Action. Spanish Solutions is happy to discuss people’s individual cases as the team knows there are more people out there who are on the point of giving up – but definitely should not because this situation can be fought, and if justice is done, won.

A twist in the tale

As Spanish Solutions investigated Roy’s plight, it discovered even more underhanded business practices and another business trying to make money out of other people’s misfortune.

When the ‘builder mortgage’ scandal was coming to light several years ago a UK company contacted many of the victims in UK and Spain and offered to help by acting for them as an agent, using UK and Spanish lawyers to get their money back or safeguard their property.

Many clients were charged an average of £20,000 each to submit actions and undertake certain work, a lot of which it appears never took place. One client took legal action against them in the Small Claims Courts in the UK and was successful. A few of the clients have used money obtained by Spanish Solutions from this company to help fund legal action.

Readers in the same position; with a property in Spain, without deeds in their names, and aware that there is a mortgage against it, or a property that has been repossessed, or the keys were handed in, due to a similar story, should be aware that as long as they have paperwork, they have a very good chance of recovering all they have lost….

For help or advice on any of the issues raised above please contact Amanda Thomas on 966 760 917 or email: enquiries@spanishsolutions.net. This story was published in the Costa Blanca People by Mireille Toddington July 2016