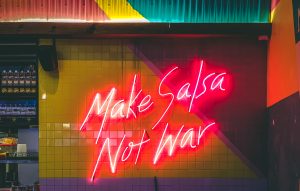 It can only be in Spain, that the residents of a small town in Valencia, of usually under 10,000 people, produce each year in their sleepy little place, an incredible spectacle of a giant food fight involving more than 20,000 people… oh and a lot of tomatoes! (Before ticketing was instigated, apparently there were more than double that amount of keen tomato throwers descending on Bunol).

Bunol, (pronounced Bunyol), just forty kilometres from Valencia, is the venue for total madness. Its a festival for the town’s patron saint that ends now with a tomato fight of epic proportions.

There is absolutely no religious significance whatsoever to La Tomatina aside from it originating from a fight breaking out during the religious festival in the 1940’s. Held every year on the last Wednesday of August, so the 28th in 2019, participants travel from around the globe to take part. It starts around 11am with a burst from a water cannon. Tradition says it should only commence once someone has claimed a special ham from the top of a greased thirty foot pole, but that is so impossible, they just start anyway.

The owners of cafes, shops and other businesses use sheets to protect their premises as the town definitely gets painted red! Everybody just fires at everybody else with Spanish tomatoes and it extremely messy.

It strictly lasts only an hour as the town hall wants to get the place cleared up, so then the brave tomato fighters go down to the local river and clean off. Shower facilities are provided. Just like every other festival in a quiet place in Spain, the day after it is as if it has all been a dream and nothing untoward ever happened.

If you are working your way through festivals in Spain, or fancy doing, or watching (but be careful) then the 28th August is the date for your dairies.

You are best travelling to Valencia and staying overnight then making your way to Bunol by one of the many local buses and trains. Don’t forget you will need to buy tickets online.