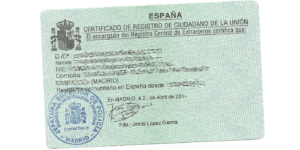 From time to time we have clients say to us that on many websites it says after 3 months you must get residency. On other law office’s websites it says that after 6 months you are legally resident in Spain. Here, we explain all you need to know about Spanish Residency For British Citizens.

This causes a great deal of confusion to those intending to move to Spain. Getting the information correct is important Especially prior to Brexit for expats wanting to get their paperwork in order.

There were changes to the residency regulations in July 2012. The Spanish government introduced new residency requirements for all EU citizens.

Under the new rules, EU citizens applying for residency in Spain are required to provide;

We can help you with all the information on how to get a Spanish Residency card (contact Gema for any doubts on this). Then you have the right to reside in Spain, but that is different to being a tax resident of Spain.

So the FIRST STAGE if you are going to live in Spain is that you ask us to apply for Spanish residency. Then you can start getting benefits as a Resident.

Do I need to pay taxes in Spain, or not?

This is the SECOND STAGE. To be or not be a fiscal resident in Spain?

The 6 months rule comes in to play here. If you live less than half a year in Spain you usually do not need to pay resident taxes in Spain. If however you live more than 183 days a year in Spain you do. This applies even if your business is in the UK (with some exceptions).

You don’t need to tell HMRC if you’re leaving the UK for holidays or business trips.

Many clients have queries on:

You will find many of the answers in this tax section that you need.

In most cases, they cannot avoid paying tax.

If someone is living in Spain, then they are deemed a tax resident and have to pay taxes to that country, just the same as in other countries.

Everyone knows someone who lives in Spain but still pays their taxes in the UK. There may be a reason for that. For example, UK rental income is taxed in the UK, but the person is still liable for Spanish taxes on this and may have to declare it, which is where the double taxation treaty comes into play.

Tax is a specialist subject and people should ensure that they know the facts before making major life changes. Now, more and more information is being shared between countries and you should make sure you understand your tax residency status (sometimes people may spend less than 183 days or half a year living in Spain but because their family are based in Spain, may still be liable for Spanish taxes).

TALK WITH A TAX EXPERT

Is paying tax in Spain a choice?

The main facts you should remember are:

Please remember, and do not forget, to advise your friends and family that Spanish Solutions can help with obtaining Residencias and with Taxes.