The difference between Pulpo, Calamari and Chipirones…

When Talk Turns to cephalopods….

A few days ago we had our company annual Xmas do, and talk turned to cephalopods. Of course no one actually used that word, but it sort of started with what the devil is the difference between all that Spanish stuff; “calamar”, “pulpo”, “chipirones” and all that. So I promised to write a blog on what they are.

First and foremost, all of these come from the “family” of cephalopods (great word that… try saying that after a few beers), which include octopus, squid and cuttlefish and are found in all of the oceans on Earth, either on the bed of the sea or in the open waters. 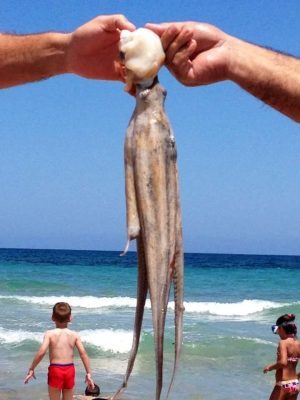 Most people would know what an octopus looks like and they can be tiny or absolutely huge monsters. They have eight legs, almost always covered on the undersides with suckers. These are “pulpo” in Spanish. Pulpo is delicious but has to be cooked carefully or it can be tough. If you are going to try it for the first time, you might be better with “pulpo a la plancha” or grilled octopus, rather than boiled, as this can be chewy. A Spanish friend of mine taught me that when blanching the octopus, it should be dipped into boiling water three times then placed in simmering water for an hour or two with say chopped onion and a bay leaf. The tentacles are quite long and are cut into pieces, and the head can be sliced. 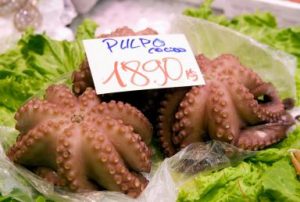 “Calamar” is the Spanish word for squid, usually seen on menus as calamari. Octopus have round heads, but squid have a triangular shaped head, but eight legs. Squid have two tentacles and two fins on their head. The tentacles help them catch their prey. Calamari are generally found fried (the tube or tentacles) and are delicious, crunchy and tasty. The tube can also be stuffed. 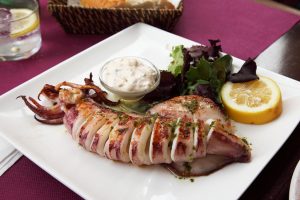 Cuttlefish in Spanish is “jibia” or the more popular culinary name is “sepia”. It is not as common and is sort of a cross between an octopus and a squid. It is very white and thick and has a subtle flavour. It can be stewed, grilled, friend or boiled. When I was a child I remember we used to have hard pieces of dried white cuttlefish in our aviary for the birds to peck on. A cuttlefish has shorter tentacles and so the body or tube is where the thick slices come from.

“Chipirones” are baby squid or very small cuttlefish and are usually seen battered and deep fried, and are the ultimate snack food. My mouth is watering as I write this. Cooking them at home; if small toss into seasoned flour and drop into a deep fryer for about 60 seconds. Serve with lots of lemon. The bigger ones, fry some chopped onion, garlic & a little red pepper for 5-10 mins in olive oil, then add the squid with either/both white wine & tomato. Cook for about 5-10mins. If the squid came with their ink, put that in instead of the tomato. 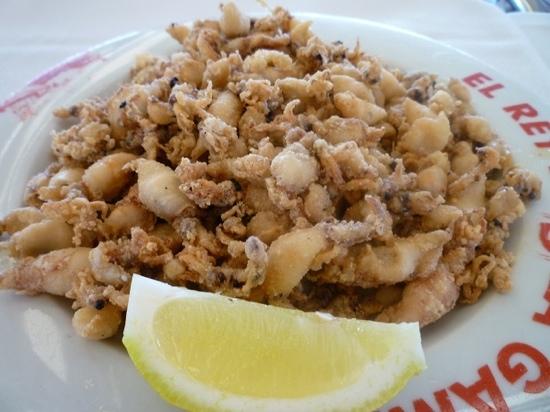 Ink is released by almost all cephalopods into the water as an escape mechanism to confuse predators. It is also used in many culinary dishes. Each species releases slightly different coloured ink; the octopus generally black ink, squid blue-black ink and cuttlefish have a more brownish ink. Sepia as a word is actually associated with the brown colour of cuttlefish ink. The other interesting fact about cephalopod ink is that recent research as shown it is toxic to some cells, including tumour cells. Apparently it is a unique health food that has many benefits, not just in fighting cancer (so I am going to have to learn to get to like it…).

Are you struggling to find genuine, honest, English- speaking legal help in Pilar de la Horadada, Mil Palmeras, Los Alcazares, Torre Pacheco or similar areas?  If so we can help!  Don’t sign anything before talking to us and give you our legal advice. We come to you in an hour!

Nicola works closely with the expat community here in the Orihuela Costa and surrounding areas, her areas of work are NIEs, Residencia, Wills and any Traffic matters.